... Austria:
As someone told me, they're absolute geniuses the Austrains. They have suceeded to convince the world that Hitler was German and Beethoven was Austrian.

The audience:
If you have a picture that really works and you feel that you got the audiences by the, um, by the throat, and that's not very often, that's why I say if you got them by the throat, don't let it go, just squeeze more and get 'em by the gut and stab 'em, because they're such bastards.

It's not a profession for a dignified human being... If I had a son I would beat him with a very large whip, trying to make a gardener, a dentist or something else out of him. 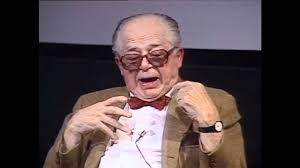